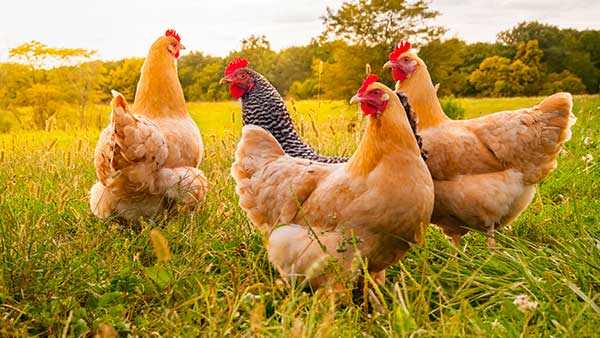 Diet habits are shifting towards a meat-based diet, especially in developing countries due to increasing GDP, and poultry meat will play a predominant role in the sector, with a growth rate of more than 4% p.a. in the last few years. Among livestock sub-sectors, chicken emerges to have the highest feed conversion efficiency, requiring less feed to produce the same amount of protein as pigs and ruminants. However, it should be noted that the growing demand for poultry meat implies a considerable increase in feed availability. Cereal grains are the primary source of poultry nutrition and oilseeds are the most common protein source, being maize, wheat, and soybean the main ingredients in poultry diets. Because of this diet composition, which includes several human-edible feed crops and less roughage, crop residues, and swill, than that of other livestock, a real competition for the use of natural resources has been created, as well as an increasing pressure on natural resources availability. This study aims to assess and estimate the local feed availability and the related amount of local and non-local land and water resources consumed for poultry production worldwide. The analysis is developed on a country and region scale as of 2016, including a detailed global feed trade analysis for the top poultry producer countries. Country-specific diets were used for the ten largest producer countries (covering 60% of the total poultry production) and two simplified diets for the global scale. The feed amounts were transformed in land and water demand using crop-specific yields and a physically based and spatially distributed hydrological model. The findings showed that 49 Mha and 64 Mha of cereals and soybean cropland area, respectively, were needed to feed chickens globally. In addition, approximately 223 km3 and 267 km3 of water were required to grow these feed crops, namely cereals and soybean respectively, in 2016 considering both green (i.e. precipitation) and blue (i.e. irrigation) water. Specifically, in the ten leader countries, 24 Mha of cereals and 22 Mha of oilseeds were planted and/or virtually traded, which required 110 km3 and 117 km3 of water, respectively. Therefore, the assessment shows how significant amounts of natural resources can be saved through the international feed trade. However, the need for new strategies to make this sector more sustainable emerges and is evident from the estimates obtained.

Our recent study about the assessment of natural resourcers for chicken production is now available. It has been published on the international journal “Advanced in Water Resources”, vol.154 and it will be available for the next three months. Here you can temporarily download the fulltext.